The Castle of Teba, with an area of 25,000 square meters, is the largest extension in the Malaga province. In the year 1330, the Battle of Teba took place, which was part of a Christian offense against the castles on the border of the Nasrid kingdom of Granada. A battle that featured the Scottish knight Sir James Douglas, who died during the siege. The Scottish nobleman, approaching the Holy Land with the heart of his King Robert I of Scotland, decided to help the Christians. This being his last battle. With the restoration of the castle, the “A Crusade in the Guadalteba” interpretation centre was born, which exhibits the courage of the heart of Robert I of Scotland.

Where the Interpretation Centre is located

The exhibition is located in the main tower of the Castle, of the Star of Teba. Known as the Tower of Homage. Briefly explained, it is a fortress of Almohad, originally built in the 12th century at the highest point of the town where the origin of the Teba people begins within its walls.

To access the Castle, you have to climb the hill from Calle la Estrella, along a modern asphalt road. The path is wide enough and can be accessed by vehicles up to the top. Once parked, you can access the castle grounds. You have to walk around 5 minutes to get to the Torre del Homenaje. However, you have to take into account that it does not have access adapted for people with reduced mobility.

In the Interpretation Centre,  it mainly exhibits the events that occurred during the summer of 1330 with an emphasis on the battle of Teba. In full Christian offensive, a coalition of armies formed by Castilians, Leonese, Aragonese, and Portuguese joined by a group of Scottish knights under the command of Sir James Douglas against the castles of the Granada border , composed in the towns of Cañete, Teba , Ardales and Turón.

The tower is divided into several rooms where you can perceive and enjoy artifacts and objects found in the area where the battle took place. Before starting the visit, there is a room where you can enjoy a brief projection which explains very clearly the army’s coalition, methodology and chronology of the battle. 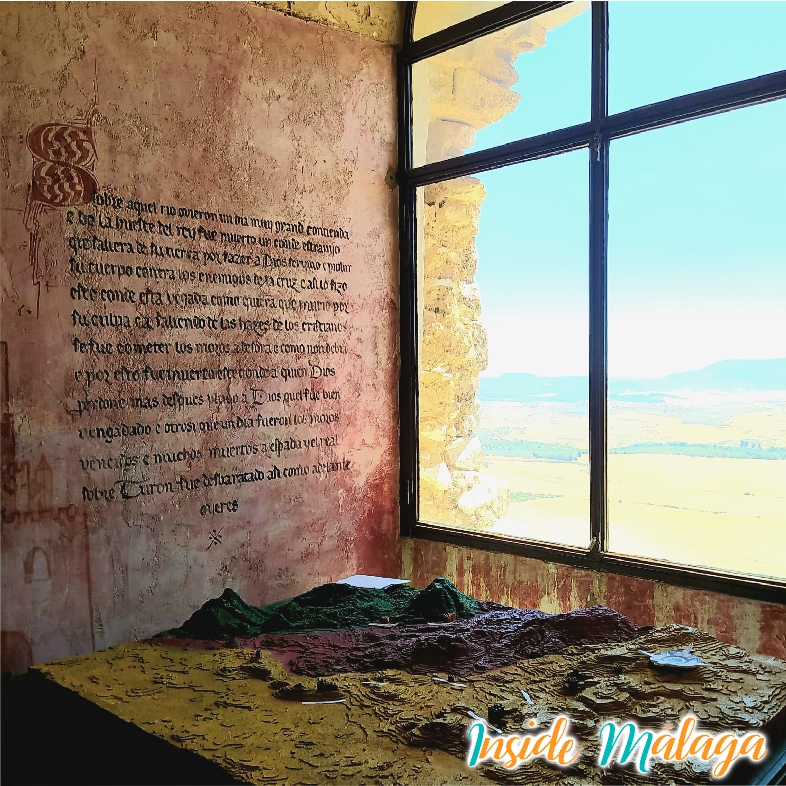 From #insidemalaga, we value the attention we received from the very commited staff and the models of the castle and battlefield accompanied by informative posters. Finally, the atmosphere of the exhibition recreates the battle in a wonderful way, together with the lighting of the exhibition, the engraved and painted walls, etc. The views of the area which can be seen from the tower create a good experience to understand the history of the province of a nice shape.

The normal entrance fee is 2 euro with a reduced rate of  1 euro if you are a students, pensioner, a child or a residents of Teba). They always check the current rates through their official page.

For more information about Teba: visit the Town Hall page